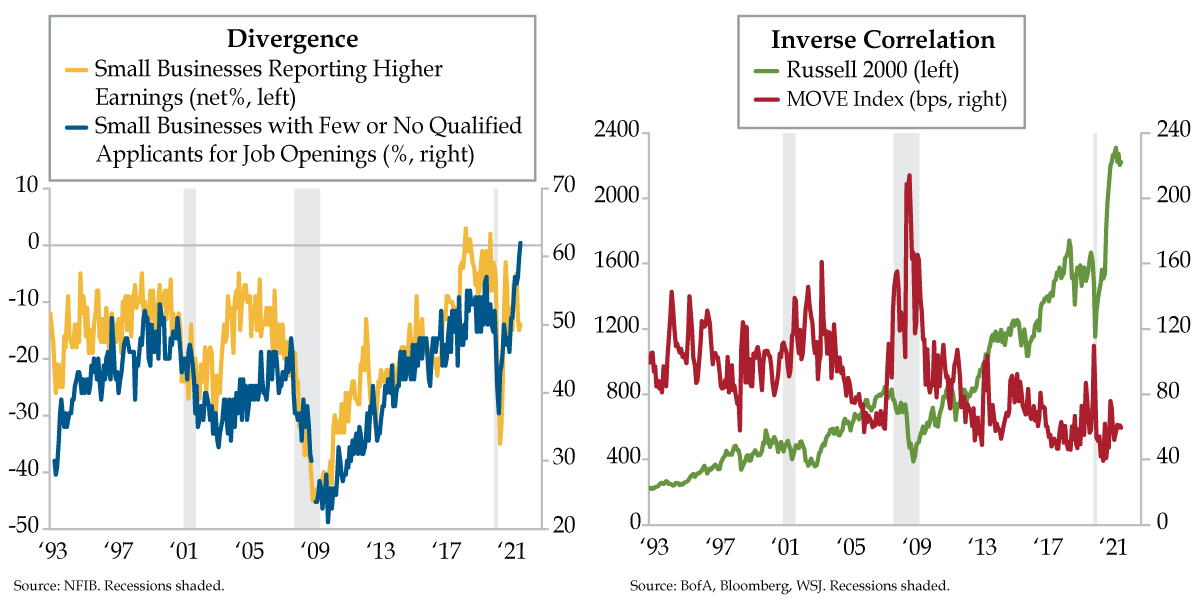 When I was younger, so much younger than today
I never needed anybody’s help in any way
But now these days are gone, I’m not so self assured
Now I find I’ve changed my mind and opened up the doors

Help me if you can, I’m feeling down
And I do appreciate you being ’round
Help me get my feet back on the ground
Won’t you please, please help me?
Help me? Help me? Ooh

The Beatles “Help!” released in 1965 runs just two minutes and eighteen seconds, but packs in 267 words, making it one of the most lyrically dense hits of the era. There are only a few seconds in the song where somebody isn’t singing. While not John Lennon’s intent, The Beatles sped up the tempo to make it more radio friendly. Have a listen. You’ll see what we mean. Marketers have also demanded “Help!” over the years. In 1985, Ford applied the ditty to sell cars, a Beatles first.

“Help!” is reserved for more than your listening pleasure; it drives the economy forward. Recruiting fresh help expands businesses’ headcount and is intended to boost productivity, especially for small and medium businesses where labor is a relatively greater input into final output. Recent trends suggest large corporations are winning the battle to sign on talent, while establishments down the size scale are significantly more challenged.

Per ADP’s September National Employment Report, large businesses (500 employees or more) added 390,000 private sector jobs; that compared to the 178,000 gain for small and medium-sized concerns. While this divergence is not typical, the 212,000 gap of large over small/medium qualified was the fourth largest on record. For perspective, the differential was flipped favoring small/medium hiring over large in the prior 12 months ended August 2021.

Vistage validates. The world’s largest executive coaching and peer advisory organization for small and midsize business leaders’ quarterly CEO confidence index expands on the labor issues ADP flagged. Third-quarter results indicated that more than two-thirds of CEOs said that hiring challenges are impacting their ability to operate at full capacity. That’s called a revenue problem. Vistage expanded: “The pressure to retain existing workers is intense as more than a quarter of CEOs report decreased retention rates since the beginning of the year. Replacing a lost worker will take longer and cost more than ever…there is a direct correlation between retention rates and revenue.”

Clearly, some of the 0.4 post-pandemic increase in the workweek to September’s 34.8 hours we highlighted in Monday’s nonfarm payroll recap reflects employers extracting as much as humanly possible, and then some, from their existing employees. Of course, there’s nothing free about squeezing blood out of rocks when rocks are in short supply. As Vistage reported, 63% of CEOs are responding to the challenges posed by lifting wages and 21% are tossing in hiring bonuses. Nearly half of small/medium businesses have recently raised wages by 4% or more. With the bottom line being sacrificed to underpin the top line, save for the involuntary shutdown during 2020’s second quarter, CEO expectations for earnings growth fell to the lowest since the last three months of 2012.

The National Federation of Independent Business (NFIB) confirms weakening profits. Illustrated in today’s left chart, a net -14% of small businesses reported higher earnings this quarter (yellow line), a deterioration from June 2021’s high of -5% and an unfavorable comparison to February 2020’s pre-pandemic -4%. It follows that a record high 62% bemoaned few or no qualified applicants (blue line). Moreover, the small business wage curve is steep, with a record 48% raising worker compensation and a record 30% planning to up the ante in the next three months.

QI mentor and NFIB Chief Economist Bill Dunkelberg explained that owners are clearly trying to hire but failing despite immense wage pressures even as “inflation is squeezing profits (the major source of operating capital for small firms) so firms are raising selling prices.”

In a slowing economy, raising selling prices to compensate for falling revenues is akin to hope being a strategy. In a fresh update Monday afternoon, Cox Automotive economist Jonathan Smoke struck a hopeful tone: “It could be October is the bottom for the sales pace.” September’s 12.2-million seasonally adjusted annualized rate (SAAR) was a 16-month low, off by a quarter from last year’s 16.3 million and 29% below September’s 2019’s 17.2 million. And it’s not just rental car providers, commercial fleets and government buyers that appear to have replenished their stocks as sales to this cohort fell 21% over the prior 12 months. The balance of retail sales fell by a deeper 23% to a SAAR of 10.7 million, which was down from 14.0 million in September 2020 and 13.8 million in September 2019.

You don’t need “Help!” to connect the dots that higher prices induced by rising wages risk not only a slowing economy but amplified rate volatility. Since 1993, the MOVE index of implied U.S. Treasury volatility (red line) has a -.63 correlation to the Russell 2000 stock index (green line). We know the MOVE has moved off its September lows. If the terrible taper becomes a reality November 3rd even as DC brinkmanship heightens further, more short duration rate volatility could kick in as fast money starts wagering on the timing of the Fed’s first rate hike.